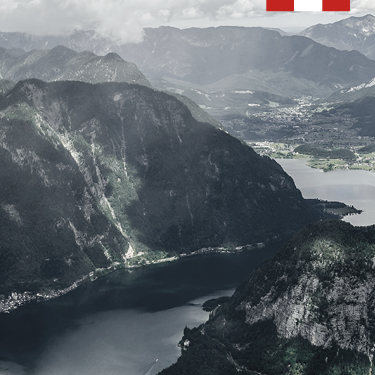 The team constantly innovates, using knitwear in trekking shoes, integrating ultra-modern materials and developing their own progressive ideas. All this, and the immense enthusiasm of the people behind the brand, have helped to mould the Dachstein image since 1925.

Outdoor & Urban Footwear From The Heart Of The Alps

Ever since 1925, the shoemaking company Dachstein has been combining traditional Austrian shoe manufacturing craftsmanship with innovative ideas. Performance or Lifestyle? The Austrian footwear manufacturer Dachstein doesn't believe in the either/or approach.

The team constantly innovates, using knitwear in trekking shoes, integrating ultra-modern materials and developing their own progressive ideas. All this, and the immense enthusiasm of the people behind the brand, have helped to mould the Dachstein image.

We're celebrating our birthday! 95 years have passed since the first Dachstein shoe was produced. We have taken this as an occasion to look back on the past years of Dachstein. Many exciting and decisive moments, important development steps and innovative highlights have shaped the last 95 years. We have summarized the most important ones here.

Dachstein’s DS Iceland shoe wins the Red Dot Award, an award that distinguishes the unique design, which is underlined by the combination with highly functional details.

The Finnish Luhta Sportswear Company takes over 100 percent of Dachstein. Dachstein is now part of the Finnish company group. The design of the products as well as marketing and sales remain based in Salzburg.

Dachstein receives the ISPO Award Gold for its Ocean collection with ECONYL® (regenerated nylon). With this collection Dachstein takes the first steps towards sustainability.

The Finnish Luhta Sportswear Company (Lahti) acquires a 49 percent stake in Dachstein in the summer of 2018. The Luhta Group is one of the largest sportswear manufacturers in Scandinavia, with sales of over 245 million euros and 1,700 employees. Its international and vertical sales structure is the reason for its broad positioning. In the coming years, Luhta will support Dachstein's internationalization and growth as a strategic partner.

A world first in hiking boots is developed: With the Super Leggera DDS, Dachstein presents a completely new product innovation made of knitted, highly functional upper material and wins the OutDoor Industry Award 2015.

The Dachstein Outdoor & Lifestyle GmbH is founded. The brand becomes an independent company and remains a majority holding of the Austro Holding established by Dr. Erhard F. Grossnigg. The traditional brand presents itself with a new strategy, extraordinary look and a completely new team that works intensively on interesting innovations and fresh designs.

The 2012 collection is expanded by an Approach line. From now on the segment of approach shoes will also be perfectly served by Dachstein.

Another Dachstein novelty is introduced in 2011: The shoelace of the E-Lacing quick lacing system can now be stored comfortably and safely in the "Double Pocket", a sewn-in pocket in the tongue of the shoe.

In 2010, the previously exclusive summer collection is expanded to include high-quality winter boots and shoes. Great attention is paid to safety - non-slip on mud and snow - and a special ortho-tec® winter sole is developed.

Since 2006, the keywords comfort, health and safety define the product range at Dachstein and lead to the development of two revolutionary new products: the "Lace Smart" quick lacing system and the ortho-tec® sole with low weight and excellent rolling characteristics. In 2007, the new sole also forms the basis for the development of a shoe especially suitable for prosthesis wearers. Following intensive market research and various test series in 2008, the shoe is launched on the market with great success in 2009 in cooperation with the German healthcare company medi.

Deeluxe Sportartikel Handels GmbH, founded in December 2002, acquires the trademark and distribution rights for Dachstein shoes on April 1, 2003. A new collection is already presented to retailers in summer 2003 and is optimized and expanded in the following years.

The new brand concept in the Kneissl and Friends Group, which has emerged from Kneissl Dachstein AG, provides for a product orientation towards the brands Kneissl, Raichle and the new brand DEELUXE. This strategy is implemented in 2000. Dachstein only plays a minor role and is sold exclusively by post.

After a long period of development, a new ski boot is introduced in 1997, which allows sole trimming geared to carving skis. In 1998 Raichle Boots AG from Switzerland - which carries the same product lines as Dachstein - joins the Kneissl Dachstein Group.

The new impulse in the ski boot market in 1988 is the ski boot system of the future launched by Dachstein: Central entry iis the new, sporty solution at that time.

With the expansion of the product range in 1979 to include cross-country skiing, leisure and jogging shoes, series production exceeds the sound barrier of 1 million pairs of shoes per year for the first time. New innovations such as PU sole technology are introduced and in 1982 the basis for today's hiking boots is created.

Dachstein starts manufacturing shell ski boots using injection moulding, and by 1976 the entire range of ski boots has been converted to this new production method. This process and the entry into ski racing opens the way for many sporting successes.

An industrialised production for shoes develops. The company specialises in ski and mountain boots and in 1958 reaches a production capacity of no less than 2,000 pairs per day.

A good twenty years later his son of the same name takes over the shoemaker's shop.

Anton Lintner founds a shoemaker's shop in Molln, which he names after the Dachstein, the highest mountain in Upper Austria.